History is Alive in Telegraph Cove

In 2012 Telegraph Cove celebrated its 100th anniversary.  A part of the traditional territory of the Namgis First Nation, this picturesque community has been enchanting people for many generations with its beautiful scenery, strategic location, and historical significance to the .
It’s hard to describe the ‘feeling’ of Telegraph Cove.  Many people have been smitten by its natural beauty and the warm friendly feeling of its community. The docks and buildings have been the subject of many paintings by artists, and many people have been returning every summer for decades and some for generations. 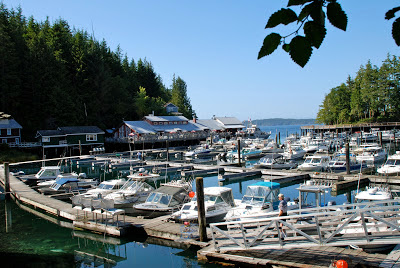 The story of the Cove begins in 1912, when Alfred Marmaduke Wastell suggested the cove with good moorage for a telegraph lineman’s station, and christened the location ‘Telegraph Cove.’ The telegraph line ran from to Port Hardy, and eventually also included the community at .
The first inhabitant of Telegraph Cove was lineman Bobby Cullerne. His job was to patrol and fix the line when it went down.  At that time the line was strung between trees, and a trail followed the line.  When the line went down (literally) Cullerne had to walk the trail to find out where the trees had blown down and find a way to repair the line.
Wastell, then manager of a box factory in , clearly saw potential in the Cove.  He eventually purchased the timber rights in the area and supplied spruce lumber to the Canadian military who used it to construct aircraft in World War I.
In the early 1920s Wastell acquired a piece of private property in Telegraph Cove as payment for a bad debt.  In the next few years he partnered with Japanese investors and opened a fish saltery in the Cove.  There was also a small mill that operated for a couple of years. 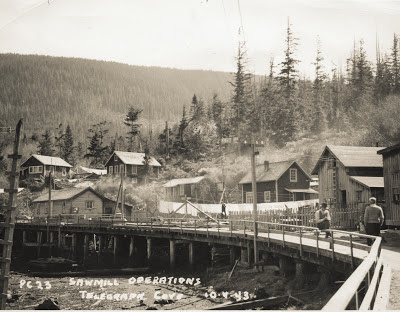 In 1928 Wastell and his son Fred were both put out of work when the wooden box factory in closed, as the fishing industry switched to cardboard boxes.  The Great Depression made their situation worse. The small fish saltery that had operated in Telegraph Cove also closed.
Fred Wastell came up with a plan to re-start the mill in Telegraph Cove.  He contacted an old friend, Alex MacDonald, to operate as a partner.  They needed to upgrade the mill, build houses, and set up power and water for a small mill community.
A number of Chinese labourers moved into the Cove along with the Wastells and the Chinese residents fixed up an old shack for themselves which became known as “China House.”
Telegraph Cove Mills opened in 1929.  It cut custom wood for a number of purposes.  It operated for more than 50 years.
The Broughton Lumber and Trading Company developed a wharf in Telegraph Cove that was 170 ft long.
During these years the community only had electricity for one morning a week for domestic use.  Newspapers would arrive once a week on the steamship. Eventually a number of homes were winched onto the heavily wooded shore and connected with a wooden boardwalk.  The community had a mill, post office, school, and store, and steamers began to call at the port. 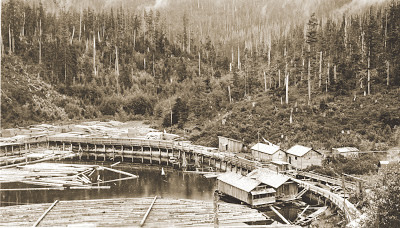 
During World War II the Canadian military again made use of Telegraph Cove, taking over the mill and using it to produce lumber for the Air Force stations which were constructed at and Port Hardy.
A number of Japanese families lived in the Cove were interned during WWII.  Their friends in the community tried to save their belongings by storing them, but the dampness and the length of their internment resulted in most of their belongings being lost.
The sawmill closed in 1980, and in 1985 Fred Wastell died.
In 1979 Gordie and Marilyn Graham purchased property in the Cove and built a campground, RV park, and marina.  They lovingly restored the houses, boardwalks, and docks with the goal of preserving the historical integrity of the Cove while making it accessible for tourists.
Today when you walk along the boardwalk there are many signs and plaques with interesting stories about the history of the Cove that give a great feeling about the unique character of its history and more generally the history of the .  It is truly a gem to have this small village from another era remaining intact.
A booming tourist industry operates in the Cove today, which includes a restaurant and pub, galleries, stores, and service providers who offer whale watching, grizzly bear viewing, kayaking and sportsfishing.
A world class museum exhibits whale bones and the bones of other marine mammals, including sea otters, dolphins, seals, and sea lions. It was started when Jim Borrowman provided a donation of unique skeletons and the Grahams donated a building to house the exhibits. The Bones Project Whale Interpretive Centre is open on a seasonal basis and in some years has had over 20,000 visitors.

Posted by sixstories at 9:17 PM